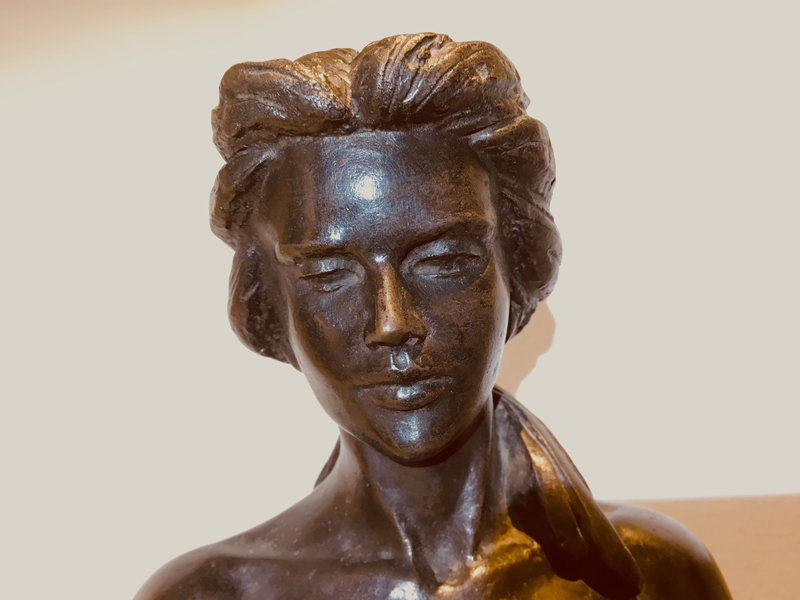 Carmen Grau
"Even though it is true that I had a latent desire to do some kind of artistic activity, the fact is I didn´t take it seriously and always thought that, if I ever did, it would be mostly concerned with drawing or painting, so that it never ocurred to me that it may have something to do with sculpture, perhaps because the technique was completely unknown to me. But I suppose the affinity with a given branch of art is deeply rooted within you and finally it just finds its way out to the surface. So one day I found myself buying moulding clay, without even wondering why. I made a man´s life-size head, without a model, and I remember my hands worked very fast, as if they knew better than myself what was to be done. To me, sculpture reflects better than anything else the idea of solidity, majesty, eternity, immutability. That is why all my figures are at rest. Capturing a gesture seems to me purely anecdotic. I try to find balance in volumes and spaces which must have their own inner coherence. If that is successfully achieved, I think we may say the work can exist on its own right. Good art must always appeal and be good to the senses, arouse the feeling of depth, of beauty, of universality, which we all possess. Good art takes mistery out to light, that is why we are always enriched by it."

- After the great revolutions, can we say that everything is already done in art?

"Revolutions were made because there was something to be revolved, there was a need to break down with academic art, with the theme being imposed on the artist. Freedom was conquered by placing value on the material rather than on representation. Nowadays we are precisely on the opposite side, that is, we are forced to innovate.. when , in fact, few things remain to be changed. Maybe it would be wiser to go back to a little discipline and to considering art as a craft rather than as a means to reaching stardom."

- But I think there is a trend to turn back to figuration...

"I think is is quite right because figuration had suffered from a lack of prestige in favour of abstraction. Also, we tend to forget that figurative does not mean realistic. The word "realistic" in fact, what does it mean? Which reality are we referring to? There are so many. There is always a personal interpretation on the part of the artist."

- Sculpture seems to have always been second to painting since there are not only less exhibitions but, also, you rarely see a sculpture in extremely expensive works on auctions.

"The rate is said to be of one sculptor every forty painters, because the sculptor´s work has always been practically anonymous, in the company of heavy materials and in the shadow because of the nature of the material used. Egyptians, Greeks, Etruscans and Romans in ancient times worked with a purely professional sense, they were not aware of being artists and even now we ignore the name of the authors of very famous sculptures. Furthermore, it is easier for someone who gets interested in art to buy some brushes and colors because these will always be infinitely more attractive than clay, iron or stone. This century started a revolution in painting and sculpture seemed left behind , confined to just the monumental and commemorative. But important changes have taken place over the past few years so that, even though we still talk about "sculpture" , the fact is that it has now turned into a new kind of achievement which falls somewhere between two concepts, i.e. what is not a landscape and what is not architecture. It is usually called an installation or assemblage or also expanded field, etc..."

- What is the role of sculpture at the time being?

"Art reflects human society and I believe it now reflects a feeling of the ephemeral, against the steadiness of other times. It reflects the rather fearful, restless times we are living in. The concept of eternity has lost value in our world in favour of what is fast vanishing.It seems we are all the time ironizing about these values and making a clean sweep of it all. Time -"that great sculptor" in Marguerite Yourcenar´s words- will tell us the real truth of it all."